[00:00:00] DJ Suss D: Here are some news shorts from the Institute for Public Accuracy.

[00:00:06] A new study published in Proceedings of the National Academy of Sciences USA has found that between the beginning of the pandemic until mid-March 2022, universal health care could have saved more than 338,000 lives from COVID-19. The study also calculated that $105.6 billion could have been saved in healthcare costs associated with COVID hospitalizations.

[00:00:31] The study demonstrates that a significant share of COVID mortality in the U.S. is “due to our reliance on a system of market-driven health care.” James G. Kahn, MD, is the professor at UCSF’s Institute for Health Policy Studies.

[00:00:47] Kahn, who is a co-author of on the study, told the Institute for Public Accuracy, “This important modeling analysis and its companion empirical study in Lancet Regional Health demonstrate the massive mortality burden imposed on U.S. population by the lack of universal insurance.

[00:01:04] “Tens of thousands of added deaths in a typical year and more than 300,000 during COVID placing the profits of private insurers over the lives of hundreds of thousands of Americans is obscene .”

[00:01:16] Kahn’s comment in Health Justice Monitor notes that the pair of studies finally provide a firm numerical estimate of COVID-19 mortality in its relation to American health care.

[00:01:26] Alison Galvani, the study’s lead author, told Scientific American that health care reform is long overdue in the U.S.. Prior to the pandemic, 28 million American adults were uninsured and 9 million more lost their insurance as a result of unemployment at the start of the pandemic.

[00:01:43] The study compared the mortality risks of COVID-19 among people with and without insurance, their cost estimates of ensuring the entire U.S. population. The authors found that a single-payer health care system will generate savings in three ways: more efficient investment in preventative care; lowered administrative cost; and increased negotiating power for pharmaceuticals, equipment and fees.

[00:02:16] He said today, “In this digital era, the biggest private tech companies can engage in what we term censorship by proxy, restricting freedom of expression or ability to raise funds in ways that the government cannot.

[00:02:40] These new media giants, including: Alphabet, which owns Google and YouTube.; Meta / Facebook, which also owns Instagram; Twitter; Apple; and Microsoft; function as the arbiters of public issues and legitimate discourse, despite assertions by their leaders that they are not publishers or media companies.

[00:02:59] The crackdown on online sources and shooting the messengers is also clearly manifesting the U.S. mission to extradite and apply the Espionage Act to publisher Julian Assange of the whistleblower site WikiLeaks.

[00:03:11] In the past two months, YouTube disappeared entire Russian channels in their archives, including for RT America and Sputnik, to great applause from various sectors of American society, especially from the liberal class. PayPal froze accounts of independent media outlets like Mint Press News and Consortium News.

[00:03:29] The Biden administration announced its own efforts to control information online with the Department of Homeland Security’s new Disinformation Governance Board. Huff noted the influence of the pro-NATO Atlantic Council, which is listed as a fact checker at Facebook (now Meta) and other shadowy organizations like NewsGuard.

[00:03:50] Huff noted that big tech gatekeepers traced their technological roots back to the Cold War of the 1950s, and specifically the Defense Department’s Defense Advanced Research Projects Agency, or DARPA.

[00:04:02] We need to remember the importance of a truly free press in Article 19 of the United Nations Universal Declaration of Human Rights, which states:

[00:04:09] “Everyone has the right to freedom of opinion and expression. This right includes freedom to hold opinions without interference and to seek, receive, and impart information and ideas through any media in regardless of frontiers.”

[00:04:22] Those are principles worth fighting for in the face of mass censorship.

[00:04:27] Abortion rights advocates have been blockading intersections near the Supreme Court. At least one activist has been arrested for chaining himself to the fencing that now surrounds the Supreme Court building.

[00:04:37] Francis Boyle is professor of law at the University of Illinois. His books include Tackling America’s Toughest Questions. He’s been advocating that the Democrats embrace expanding the court since the Brett Kavanaugh hearing.

[00:04:50] Boyle said today, “Any violent actions against members of the Supreme Court are condemnable, but should not obscure a central truth to people. The Federalist Society, with its complete distortion of the constitution and phony concept of originalism, has been packing the court since the Reagan administration.

[00:05:05] “The Democratic Party should embrace counterpacking the courts. Contrary to what many claim, FDR’s plan to expand the Supreme Court was a great success. The Court got the message and began to uphold his New Deal legislation after previously striking it down, which prompted his scheme in the first place. So he did not have to pack the court, but these Federalist Society members are so hard core, it will be needed now.

[00:05:30] Eliminating life tenure would require a constitutional amendment, which is a non-starter to begin with and even a waste of time. Efforts and money to try counterpacking is the best way to deal with this.

You’re not alone: Connecting veterans and their families with help 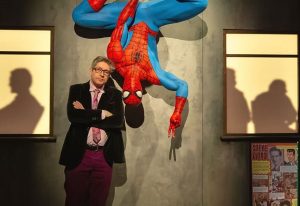 You’re not alone: Connecting veterans and their families with help

Cascades Raptor Center invites you to get out in the wild