DJ Suss D: This is from the Institute for Public Accuracy.

[00:00:03] Ramzy Mardini recently wrote the in-depth piece called ‘Course Correcting Toward Diplomacy in the Ukraine Crisis’ for The National Interest. He is an associate at the Pearson Institute and a PhD candidate in political science at the University of Chicago. He has previously worked at the Atlantic Council and the U.S. Institute for Peace.

[00:00:26] Mardini writes in his new piece: ‘As a tool of foreign policy, threat inflation involves concerted and deliberate actions to misrepresent information and manipulate public perception so as to inspire overblown, fear and outrage in turn, this helps to justify costly and risky policies that would otherwise fail to earn sufficient political and public support.

[00:00:49] Needless to say, Putin started an illegal and unjustified war. Yet to enable a course correction toward a diplomatic solution, it’s the Western-based narrative about the war that requires a repudiation…

[00:01:02] Take for instance, the purported certainty in the West that Russia’s military sought to conquer a heavily populated and fervently nationalistic country, nearly the size of Texas and initially intended to do so in a matter of days, no less. This belief is entirely baseless…

[00:01:20] Today, the narrative of an unprovoked and maximum-aim war persists and dominates the public discourse in the West. Now surpassing $53 billion in total aid since the war began on Feb. 24, the notable U.S. commitment aims to keep Ukraine in the fight over the long term. By extension, it prolongs the effort to bleed and degrade Russia’s military in hopes of ushering in its retreat, from Ukraine…

[00:01:46] Centering on grievances and concerns over NATO’s role and its eastward expansion to induct Ukraine, Russia put forth a draft agreement in December 2021 to reset the post-Cold War security arrangement with the West.

[00:02:00] But in a delivered letter, the diplomatic proposal was declared by the U.S., in clearest terms, to be a non-starter. ‘There is no change. There will be no change,’ said Secretary of State Antony Blinken on Jan. 26 in regards to U.S. commitment to uphold NATO’s open door policy to prospective members, including Ukraine.

[00:02:17] In reality, Russia’s terms for peace will be difficult to defy in any eventual settlement. Moreover, prolonging the fight furthers the carnage and could likely worsen Ukraine’s negotiating power rather than boost it.’

[00:02:29] David M. Kotz is professor emeritus of economics at the University of Massachusetts at Amherst. Kotz is the co-author with Fred Weir of ‘Russia’s Path from Gorbachev To Putin.’

[00:02:41] He said today: ‘When Mikhail Gorbachev came to power in the Soviet Union in 1985, he understood that the authoritarian repressive state and overly centralized planning system were responsible for the multiplying economic and social problems afflicting the country. He believed that the solution lay in the trilogy of glasnost, democratization, and economic reform, which he argued would bring out the full potential of socialism to liberate human beings.

[00:03:08] However navigating such a major transformation was bound to be very difficult. Instead of the reform of socialism, that process ushered in a rapid transition to a retrograde form of capitalism than the dismantling of the Soviet state.

[00:03:22] The Soviet state did not collapse or disintegrate. It was taken apart by former high-level Communist Party official Boris Yeltsin, whose drive for state power required separating Russia, where his power base was located, from the Soviet Union. Despite 76.4% support for retaining the union state in a March 1991 referendum held in nine of the 15 Soviet republics representing 93% of the Soviet population, Yeltsin enlisted the Communist Party leaders of the Ukrainian and Belorussian republics in dismantling the USSR in December, 1991.

[00:04:00] Yeltsin’s base of support was a powerful coalition of groups that favored a transition to capitalism, not the reform of socialism. That coalition included a majority of the high level party and state officials who saw an opportunity for personal enrichment, from a move to capitalism. Multiple public opinion surveys showed that a majority of Soviet citizens opposed capitalism, but they were unable to stop the process.

[00:04:24] The much limited reversal of democratic reform in post Soviet Russia under Putin actually began in the eight years of Boris Yeltsin’s presidency. The adoption of the ‘shock therapy’ rapid privatization and marketization, promoted by advisors from the U.S.,, the IMF and the World Bank, destroyed Russia’s industrialized economy.

[00:04:45] Russia became dependent on their export of fossil fuels and metals, which were seized by a class of oligarchs, while the majority were impoverished and lost their social rights. Democracy and individual rights cannot survive in a country with an oligarchic capitalism and extreme inequality.

[00:05:02] Susan Wind is the lead organizer for the new grassroots group called SAFE— Scientists, Activists, and Families for cancer-free Environments, which has announced a protest at EPA headquarters in Washington, D.C. on Sept. 20.

[00:05:17] The demonstration will feature families, firefighters, and military members from around the country who’ve been sickened by a host of environmental toxins.

[00:05:25] After her daughter was diagnosed with cancer. Susan’s investigative skills exposed a dirty secret in her town. Coal ash from the local Duke Energy power plant was sold and used as structural fill as a substitute for soil to build communities throughout North Carolina.

[00:05:49] She said today, ‘Last week, the local press in Baltimore reported on a CSX Coal explosion, coating the Curtis Bay neighborhood with coal dust. There’s no mechanism to keep track of this kind of danger while authorities assure the public there’s nothing to fear.’

[00:06:06] She added, ‘In our case, Michael S. Regan, who is now EPA administrator, was then head of the North Carolina Department of Environmental Quality. He made a sweetheart deal with Duke Energy, which basically let them off the hook. It did not appear to be the cleanup the media claimed it was going to be. It never addressed all of the coal ash that was used as structural fill.

[00:06:27] ‘The utility company has years to clean it up. A lot of people are gonna get cancer and die in the amount of time it takes them to clean it up.

[00:06:35] ‘Nationwide, there’s virtually no funding to identify cancer clusters stemming from toxic pollution and industrial plants and military bases. The federal government has promised to keep track of thousands of suspected cancer clusters, but Congress has failed to adequately fund the measure.

[00:06:51] ‘It’s criminal negligence on the part of the institutions involved. In our case, we organized a 5K run ourselves to raise the money to find out local cancer rates were three times what was expected. Why are the mothers having to do this and not the agencies? Broken indeed.’ 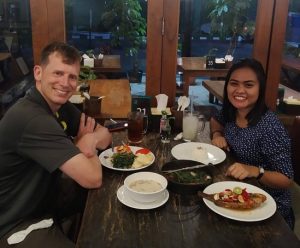 Education for a global future