The ‘firelighter’ responsible for a U.S. Forest Service prescribed burn was arrested Wednesday and briefly held in the Grant County jail.

The sheriff’s initial investigation “led him to believe that he had probable cause” to arrest firelighter Rick Snodgrass for reckless burning, according to Grant County District Attorney Jim Carpenter.

Responding to 911 calls about an “out-of-control” prescribed burn in the Bear Valley, Grant County Sheriff Todd McKinley confirmed that fire on the 362-acre Starr 6 Unit crossed the Izee Highway and spread to the Holliday Ranch.

The Malheur National Forest confirmed the spot fire Oct. 20 at 8:46 a.m.: “Last night the Starr 6 burn had a spot fire on private land. It was caught within an hour at approximately 18 acres.”

Carpenter said once the sheriff’s investigation is complete, he will evaluate the case.

“These cases rarely have a bright line and involve a number of variables to be considered,” Carpenter said. “Many will attempt to hype this into something that it is not. The question is whether one neighbor, given the prevailing conditions, was reckless when starting fires adjacent to another neighbor.”

He also indicated that U.S. Forest Service involvement in the prescribed burn would not prevent Grant County from moving ahead with formal charges.

“To be clear, the employer and or position of Snodgrass will not protect him if it is determined that he acted recklessly,” Carpenter said. “That the USFS was engaging in a prescribed burn may actually raise—rather than lower—the standard to which Snodgrass will be held.”

After the arrest, Snodgrass was transported to the Grant County Jail, where he met release criteria and was conditionally released.

According to Oregon law, a person commits the crime of reckless burning, a class A misdemeanor, “if the person recklessly damages property of another by fire or explosion.” (ORS 164.335).

“Recklessly” means that “a person is aware of and consciously disregards a substantial and unjustifiable risk that the result will occur or that the circumstance exists. The risk must be of such nature and degree that disregard thereof constitutes a gross deviation from the standard of care that a reasonable person would observe in the situation.” (ORS 161.085(9)).

The Blue Mountain Ranger District indicated Oct. 19 that conditions allowed them to start prescribed burns on the Starr 6 Unit.

“After carefully monitoring conditions across the Forest, fire officials have determined that conditions are within specific parameters, including temperature, relative humidity, and fuel moisture to begin prescribed fire operations in specifically planned units,” the district wrote.

“Fuels have lost moisture over the long, hot summer. Burning under dry fuels conditions allows the fuels to potentially consume more completely and produce less smoke. Over the past 20 years, a rising number of large and destructive wildfires have threatened lives, property, and infrastructure. Forest thinning and the safe and effective use of prescribed fire, often in conjunction, are essential tools for reducing wildfire risks and creating resilient fire-adapted landscapes.”

The term ‘firelighter’ was coined by Tim Ingalsbee of Firefighters United for Safety, Ethics and Ecology (FUSEE) as part of a new ‘Greenfire’ paradigm that would restore fire to the landscape and promote a healthy ecosystem. 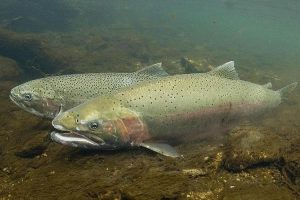 Steelhead fishing to close Sept. 15 on John Day, but will continue on Deschutes