According to the Dec. 6 board meeting materials, EWEB General Manager Frank Lawson is scheduled to present these six recommendations, which the Board can consider and share with interested parties, including community groups:

The management recommendation notes positive impacts from dam removal: “Permanently discontinuing electricity generation at the Leaburg Hydroelectric Project will result in the removal of the dam, restoring the McKenzie River to unobstructed flow and eliminating the human-made Leaburg Lake behind the dam. This will have a positive impact on water quality, fish and wildlife. Lakeside recreation facilities will shift to riverside recreation facilities for the decommissioning alternatives and trails will need to be re-configured for all altered reaches of the canal. Lakeside residences will become riverside residences.”

I care about the Willamette watershed and think it is time for the dam to be removed.

The Leaburg Dam discussion at the Dec. 6 board meeting is scheduled to begin at 7:30 p.m. Please join me in encouraging our EWEB board members to support removal of the Leaburg Dam. 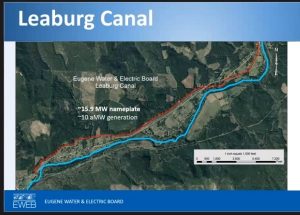