[00:00:08] Councilor Randy Groves: Thank you, Lin, and thank you ABC for providing forums like this. I think it’s incredibly important that your elected officials have avenues like this to meet with you and hear your concerns as well. I also want to thank Sen. (James) Manning and Rep. (Julie) Fahey. The state has been a good partner in helping us with many issues, in particular our unhoused challenges.

[00:00:30] You know, Eugene has the highest percentage of unhoused persons per capita in the United States.

[00:00:38] We have more—about 25% more unhoused people here—in little Eugene than Phoenix, Ariz., the seventh-largest city in the United States, and a very wealthy city. So we’re trying to address a metro-sized unhoused challenge with a small- to medium-sized city budget and staffing level.

[00:01:13] And then finally, I want to thank the partnership that we, and I personally, have with Lisa Arkin and Beyond Toxics and the talented staff that are there, and I want to congratulate them on the Mayor’s Award that they won this year at the ‘State of the City.’

[00:01:27] I’m a big advocate for the health overlay zone, and I’m confident it’s going to be passed. In fact, right now there’s some side conversations with city staff of applying this to the entire city and not just a small area.

[00:01:41] And basically the simplest way to state what a health overlay zone is, it basically places a buffer between people and industry. And I think that’s the easiest way to explain it. There’s more involved with it, but the main thing is having that separation of space.

[00:01:56] Chemical contamination is very important to me. I’m a former firefighter here in the city, former fire chief, former hazardous materials team member. And I’ve been saying goodbye to way too many firefighting friends of mine, that are all dying from cancer. And so we are acutely aware of the threats that this type of exposure can have on our community.

[00:02:16] And we want to protect people. That’s why I’m really glad that we’re also looking at expanding the public health overlay zone to our rail lines, which do transport many chemicals to different locations in and out of the city.

[00:02:29] I’m also a big supporter of looking at Bethel and getting an area plan out here. I’ve been hearing some talk from some of my colleagues about some areas of town, they’ve been waiting five years. Well, Bethel’s been waiting over 40 years, and so this is something that needs to be a priority and we need to make it happen.

[00:02:49] And I’ll also say, the other part of my ward, which is Southwest Eugene, also feels they’ve been ignored as well. It’s the one part of, the one quadrant in our city that doesn’t have a pool or a community center or even a dog park. We do have very nice amenities over there, but there’s some things that we don’t need. So we kind of share Bethel’s issue on that part of the ward, of kind of being forgotten at times, for other areas of our community.

[00:03:15] And, you know, it’s time that we work together to advocate for some real change and some updating of the plans that really drive how we live and how we operate within our community.

[00:03:30] Rep. Julie Fahey: I am Julie Fahey. I am the state representative for the Bethel area, and I currently serve as the House majority leader. So that means I lead the Democratic caucus in the Oregon House, and I am responsible for our work to pass a robust policy agenda this session, which I’m really excited about. We have a long session this year. That’s about five and a half months. And then next year we’ll have a short session that is about five weeks.

[00:03:56] In the House, 21 of our 60 members are brand-new to the legislature, and then we have new legislative leadership. We’ve got the Senate president and the speaker, and then the House Republican, House Democrat, Senate Republican, Senate Democrat leaders, all six of those people, myself included, that is, this will be their first long legislative session in those roles.

[00:04:19] And there’s huge agreement across all corners of Oregon. You know, Democrat, Republican, Independent, about what the top issues are. And we saw those in those surveys today as well: Housing, homelessness, community safety. Those are big issues, not just in Bethel, but all across the state. We’re also prioritizing addiction support and behavioral health and increasing our providers and treatment facilities there, and on strengthening our schools, and building a robust and fair economy.

[00:04:48] So, and focusing on climate change as well. So climate change, you know, is one of the greatest threats that we face, and we all need to make sure that we have a planet for our kids to inherit. Oregon has made pretty big progress on climate change in the last few years. We passed a bill in 2021 that will transition us to 100% clean energy and have done focus on EVs. Two big things we’ll probably hear a lot about: Resilient buildings, which means making sure our buildings, homes, residential facilities, commercial facilities are built in an energy-efficient and climate-friendly way.

[00:05:25] And then climate sequestration and natural and working lands. So those will be two big areas that we’ll take up. There was a task force that made recommendations on the buildings piece. They issued a report a few weeks ago.

[00:05:30] And a fair economy. And so those are the big issues that we’re working on. I’ve done a lot of work on housing and homelessness issues. That’s what I’ll be most engaged in during this session for sure on a personal level.

[00:05:42] The legislature’s role generally has been—on homelessness—has been a funding role. So we have provided funding to local governments for shelters, for navigation centers, for safe sleep sites. So the City of Eugene has gotten funding from the legislature, our local delegation, on the safe sleep sites, on the navigation center off of River Road. And we’ve also done some really unique setups, some really unique programs like Project Turnkey, which converts hotels and motels that were distressed during the pandemic to shelters and housing for unhoused people, and wildfire survivors as well, in Lane County.

[00:06:15] You know, there’s a big ask from the cities on homelessness. We really need to make sure that all levels of government are working together collaboratively on this challenge: City, county, state, the legislature, the executive branch, the service providers that we have.

[00:06:29] I don’t think there’s any one entity that needs—that is solely responsible for this. We all really, I just really need to emphasize—Councilor Groves is here—that we all need to work together on this to tackle it, ‘cause the magnitude of the challenge is huge. And I was very excited to see on the governor’s first full day in office, she declared a state of emergency related to homelessness.

[00:06:50] And that will create some really important flexibility and unlock some funding that will be very helpful.

[00:06:59] Sen. James Manning: My focus here in Salem during this session is, first off, I believe legislative equity is paramount to the future of the Oregon state legislature. Here’s a reason for that. Last session, we tried to move that forward, unsuccessfully, and we found out that I believe it’s about maybe 30% of House members are no longer with us because they can no longer afford to do this job.

[00:07:27] The second thing, universal health care, I’ve been working on for six years and what’s new—we’re in the next phase where we are looking to the governance board. The governance board will look at the financial portions of it to include federal waivers as far as the money is concerned, in order to support this.

[00:07:48] So it’s a big deal, and what it will do is that it would assure that every Oregonian, if you live in this state, you get equitable quality health care. And it will also include dental, vision, hearing aids, and there will be no co-pockets or out-of-pocket expenses. Currently, our current system does not cover every Oregonian and ours will cover every Oregonian, and we had an actuary out of New York that says that our proposal will save Oregon about $1 billion a year in health care expenses. 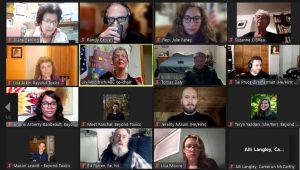 Bethel planning starts with survey results, and other updates