BANDON, Ore. – Chinook salmon numbers are stronger on the Coquille River this fall, thanks to improved ocean conditions and cooperative work by multiple agencies and local volunteers.

“The Pacific Ocean is bringing our fish back this year, and we’re all so happy and thankful for that,” said John Ogan, head of the Coquille Indian Tribe’s Natural Resources Office.

This year the tribe negotiated a cooperative management agreement with the Oregon Department of Fish and Wildlife, and the two agencies are jointly leading efforts to capture adult salmon as they return to Bandon’s Ferry Creek. As of mid-October, they had netted 36 adult females and 39 adult males.

Those fish will become brood stock at the Bandon Hatchery. The number already exceeds the 24 breeding pairs collected on Ferry Creek last fall, and the season has barely begun. Many salmon are believed to be waiting for heavier flows before starting their upstream trek.

“We all believe that the first rain we get, that’s going to be fun,” Ogan said. “They’ll get that freshet smell, and it’s game on.”

In addition to the ocean’s improved productivity, humans have taken steps to help salmon feel welcome at Ferry Creek. With financial help from the Port of Bandon, volunteers have installed a V-shaped fence that funnels fish through a narrow passage and blocks their return. Other improvements include a new fish trap and “jump pools” that function like a fish ladder to lead fish upstream.

Ogan praised the work of community volunteers from the Coquille Salmon and Trout Enhancement Program.

“A special tip of the hat to the STEP group,” he said. “They had the boots on the ground and the chest waders in the stream, and they did a lot of work.”

Ogan hopes the partner agencies will collect at least 50 to 60 breeding pairs for spawning at the Bandon Hatchery. The goal is to release at least 155,000 baby salmon, known as smolts, into the Coquille River system – and if even more if a bountiful brood allows.

This is the Coquille Tribe’s second year of partnering with ODFW and the local community to restore fall Chinook. Last year the tribe declared an emergency after learning that Chinook numbers had plummeted.

Producing salmon eggs for hatchery production is just one phase of the project. This summer the Oregon Fish and Wildlife Commission approved a “conservation hatchery” program on the Coquille River.

The new program will collect adult salmon from the naturally spawning population. Those salmon will be kept separate from the regular hatchery population, and their offspring will be released in the upper reaches of the Coquille River basin with unclipped fins. (Clipped fins indicate hatchery origin.) The goal is to build a more robust population of so-called “wild” fish that eventually will return to spawn in the upper basin.

Starting life so far upstream means those smolts must run a gantlet of invasive predatory bass that infest the river. To improve the smolts’ chances, officials plan to raise then to a larger size than usual. And they’ll release the smolts when the water is cool and the bass are less active.

The tribe’s executive director, Mark Johnston, said a lot of work remains before Coquille River fall Chinook are abundant again. “But we are excited about the current results. The whole community is energized and working together,” he said.

“We’re seeing that when the tribe, ODFW and our many community partners work together, we get results,” Johnston said. “We will continue pushing for progress, keeping our eyes on the prize, and letting nothing keep us from successfully restoring salmon harvest opportunities for both the tribe and the broader community.” 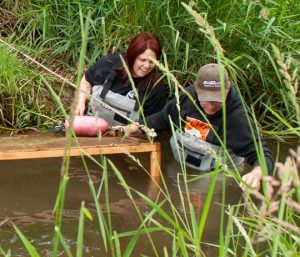